We pursue an education in the hopes that it will bring us enlightenment and knowledge. Not only does it help us understand the world around us but it also helps us form an opinion, and treat others better. However, some people, like Punjab University professor Rana Eijaz Ahmad, certainly make us fear for the kind of values that are being taught to his students.

Rana Eijaz Ahmad is among the senior faculty at the university. He is also the head of one of its departments. Recently, one of his posts on social media angered a lot of well-meaning folks.His research paper aims to diminish the false perception of men as harassers. Let’s take a look at his post before we proceed any further: 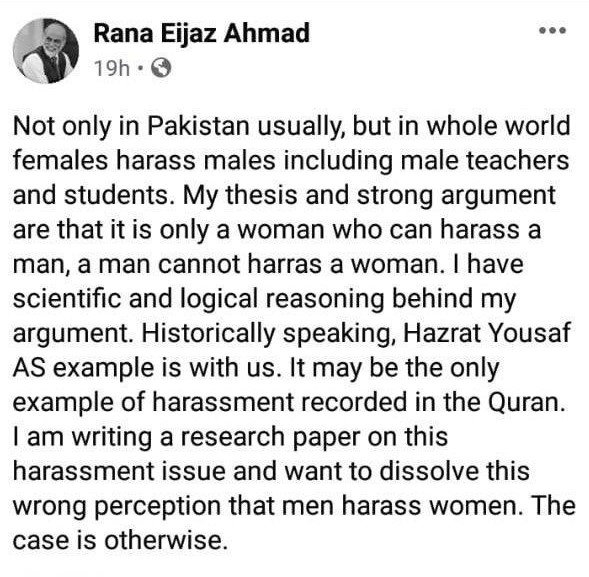 Not only does the professor believe that women harass men, but he also says that men CAN’T harass women. Quoting an incident from the Holy Quran, he says he plans on proving that women are the actual [and only] harassers.

Let’s take a look at what they have to say:

Professor at Punjab University and head of one of its institutes says there’s no such thing as women being sexually harassed by men – says it’s the other way round and that he is doing research to prove that and to “dissolve the wrong perception that men harass women” pic.twitter.com/2R0HfiB3Jv

A very good example of how worthless degrees are!! https://t.co/lMBpg8K9Pp

Professor sahab has been watching way too many HumTv dramas https://t.co/COOs5kCnEp

Although, a huge majority of the victims are women, both genders harass each other. Gender doesn’t exist in a vacuum & exists with a lot of socio-economic, political & other factors & the weak always suffer.

I want to read his other argument claiming men CANNOT harass. Really? https://t.co/VfOWcaA2fO

This Punjab University professor’s statements prove that no matter what level of education you receive, basic human decency and common sense rarely come with it. Quite a sad state of affairs to be honest.

LPG price hiked up by Rs 5/kg across the country

Nov 6, 2019
This richly imagined novel, set in Hawai'i more than a century ago,

BEAUTIFUL PLACES IN PAKISTAN THAT YOU SHOULD CONSIDER FOR VACATION

Jun 16, 2020
Pakistan is a beautiful country, and now after years of suffering from issues related to security the doors for…

Jul 15, 2020
I am just failing to understand that why this Turkish drama has arisen a sudden state of nationalist,…

Sweden to ban petrol and diesel cars in 2030

Dec 22, 2019
As per the Finance Market and Housing Minister - Per Bolund, this measure would help Sweden in becoming the world’s…
Prev Next 1 of 220