The decision has been taken to maintain the law and order situation in the country.

The PTA took the step on the instructions of the Ministry of Interior. In a letter, it said that “complete access to social media platforms” should be suspended from 11am to 3pm.

The step comes a day after Pakistan imposed a ban on the Tehreek-e-Labbaik Pakistan. PEMRA even blocked all TV channels from providing any coverage to the banned organisation.

The authorities have in the past suspended mobile phone and internet services in the areas where the party protesters had gathered in Islamabad and parts of Punjab. This is the first time a ban has been imposed on all social media sites across the country.

Pakistan had imposed a ban on YouTube for three years in the past. 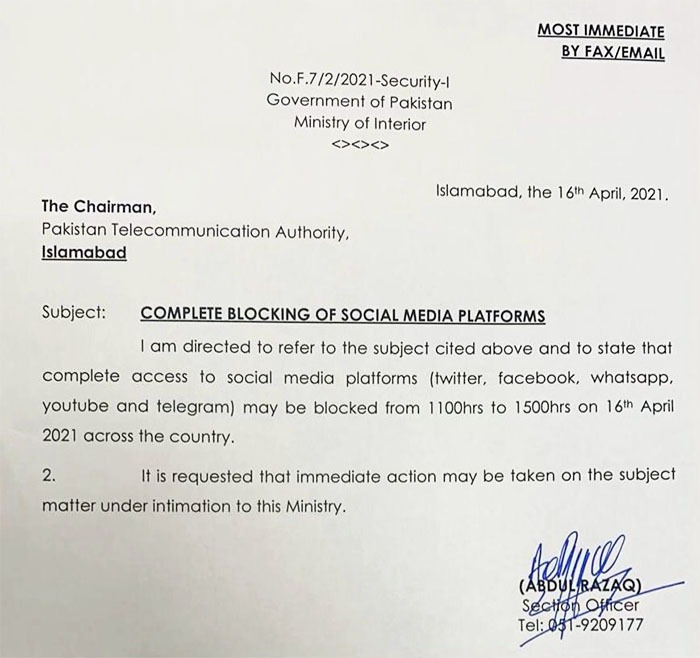 “In order to maintain public order and safety, access to certain social media applications has been restricted temporarily, sources within the PTA said.

Mar 12, 2020
Our current milieu is not prepared for mainstreaming such a slogan which is quite offensive for many people, no…

GOVERNMENT RAISED PRICES OF PETROLEUM AND DIESEL ON MAJOR SCALE!

Jun 28, 2020
PTI government is again in hot talks after increasing the price of petrol and diesel on major scales. Pakistan is…

Nov 27, 2019
Senate Standing Committee on Information Technology and Telecommunication was told by the Federal Board of Revenue…